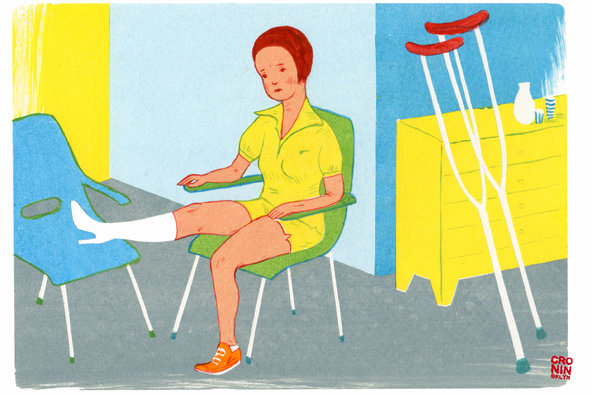 Whenever I see a woman walking (or trying to) in stilettos — skinny heels over 3 inches high — my first thought is, “There’s a sprained ankle waiting to happen.”

An estimated 28,000 ankle injuries occur daily in the United States, most of them through sporting activities, including jogging on uneven surfaces. But while no one suggests remaining sedentary to protect your ankles, experts wisely warn against purposely putting them at risk by wearing hazardous shoes or getting back in the game before an injured ankle has healed.

If you’ve ever thought, “Oh, it’s just a sprain,” read on. The latest information about ankle sprains, released in a position statement last month by the National Athletic Trainers’ Association, clearly shows that ankle injuries should never be taken lightly and are too often mistreated or not treated at all.

The result is an ankle prone to prolonged discomfort, reinjury, chronic disability and early arthritis.

Ankle injuries are the most common mishap among sports participants, accounting for nearly half of all athletic injuries. According to the report by the trainers’ association, the highest incidence occurs in field hockey, followed by volleyball, football, basketball, cheerleading, ice hockey, lacrosse, soccer, rugby, track and field, gymnastics and softball.

I was surprised that tennis did not make the list, since any sport that involves quick changes in direction leaves ankles especially vulnerable to unnatural twists. Other reasons for ankle injury among athletes include landing awkwardly from jumps, stepping on another athlete’s foot, trauma to the ankle when the heel lands during running, and stressing the foot when it is in a fixed position.

Perhaps the most interesting finding in the new report is the fact that the most widely accepted treatment for an ankle sprain — rest, ice, compression and elevation, popularly called RICE — has yet to be shown to be effective in controlled clinical trials.

“There’s not a whole lot of good evidence out there to support it,” Thomas W. Kaminski, lead author of the new report, said with a hint of irony in his voice. However, neither he nor his co-authors suggest that this time-honored remedy be abandoned.

What should be abandoned is the temptation to try to walk off the searing pain of a twisted ankle. In fact, in years past, that’s often what athletes were advised to do. But trying to walk on an injured ankle is precisely the wrong approach, the athletic trainers now say.

Also wrong, I was surprised to learn, is to immediately reach for a nonsteroidal anti-inflammatory drug (NSAID) like ibuprofen or naproxen to relieve pain and prevent swelling. Rather, it’s best to start with acetaminophen to control the pain, said Dr. Kaminski, athletic trainer at the University of Delaware.

He explained, “It’s best to wait 48 hours before taking an NSAID because you want the normal inflammatory process to kick in and begin the healing process. Then you take the NSAID to keep the swelling from getting worse.” Don’t take an NSAID on an empty stomach and don’t exceed the dosing directions.

For both people who are physically active and those who are sedentary, the only consistent risk factor for an ankle injury is having suffered a prior sprain. This fact alone underscores the importance of giving ankle injuries the respect and treatment they deserve.

Most important, Dr. Kaminski said, is to have the injury properly diagnosed to determine its extent and, in turn, dictate the proper therapy. This doesn’t necessarily mean you must race off to the emergency room and get an X-ray for every twisted ankle. But coaches, trainers (both athletic and personal), and doctors should know how to do a proper exam, checking for deformity, swelling, discoloration, point tenderness, and the ankle’s range of motion — the foot’s ability to move in all its normal positions.

Although X-rays are typically ordered for 80 percent to 95 percent of patients who go to the emergency room with a foot or ankle injury, an X-ray is not warranted unless there is an obvious deformity, bone tenderness, or an inability to bear weight or walk four steps immediately after the injury, the NATA report says. X-rays do not show damage to soft tissues like ligaments and tendons, the ones most often injured in an ankle sprain.

Nor is an M.R.I. especially helpful; both imaging tests mainly add many dollars to the cost of diagnosing and treating an ankle injury.

What should you do? Immediately after injuring an ankle, begin RICE, described in the report as “universally accepted as best practice by athletic trainers and other health care professionals.” That means get off the injured foot; prop it up, if possible, higher than the heart; wrap it in a compression bandage; and apply cold. There are various ways to ice an injured ankle: ice packs, immersion in ice water, application of frozen cups of ice or frozen bags of peas, chemical cold packs, and cold sprays.

Apply cold for 10 to 20 minutes at a time, then remove it for 10 minutes and reapply. When using an ice pack or chemical cold pack, cover the skin first with a wet cloth to avoid tissue damage. Icing can also be used to reduce discomfort before doing exercises prescribed to strengthen an injured ankle.

No longer are prolonged periods of rest recommended. The emphasis now is on “functional rehabilitation — getting patients moving as soon as possible, doing walking exercises, and enhancing joint mobility,” Dr. Kaminski said.

Most important of all, and often the most neglected, is balance training, which starts with standing on one foot (the injured one) on a firm, even surface, then on a foam surface or trampoline, first with eyes open, then eyes closed.

“The idea is to force the ankle to move under more unstable conditions, as you’d find on a sidewalk, lawn or the beach,” Dr. Kaminski said.

Also helpful is strengthening the structures that support ankle stability and flexibility. Older folks take note: ankle problems are a common risk factor for falls among the elderly, and the stronger the muscles in the lower leg, the more support they provide for the ankles.

An inexpensive way to boost ankle strength is to wrap a resistance band or towel under the ball of the foot and, holding the ends of the band or towel tightly, move the foot in every direction: up, down, to the right and to the left 10 times. Plan to do this exercise three times a day. And, of course, unless you’re a runway model, stay out of those high heels!