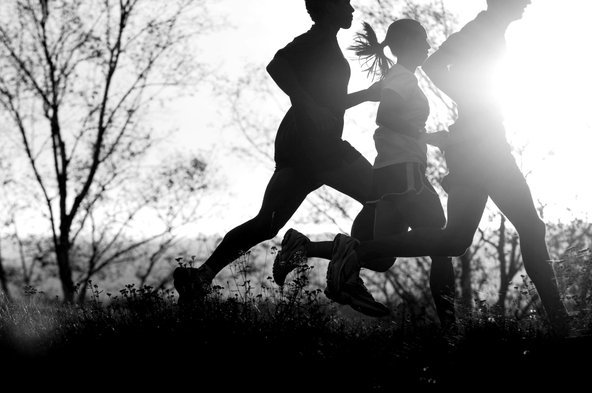 Two groundbreaking new studies address the irksome question of why so many of us who work out remain so heavy, a concern that carries special resonance at the moment, as lean Olympians slip through the air and water, inspiring countless viewers to want to become similarly sleek.

And in a just world, frequent physical activity should make us slim. But repeated studies have shown that many people who begin an exercise program lose little or no weight. Some gain.

To better understand why, anthropologists leading one of the new studies began with a research trip to Tanzania. There, they recruited volunteers from the Hadza tribe, whose members still live by hunting and gathering.

Providing these tribespeople with a crash course in modern field-study technology, the researchers fitted them with GPS units, to scrupulously measure how many miles each walked daily while searching for food. They also asked them to swallow so-called doubly labeled water, a liquid in which the normal hydrogen and oxygen molecules have been replaced with versions containing tracers. By studying these elements later in a person’s urine, researchers can precisely determine someone’s energy expenditure and metabolic rate.

The researchers gathered data for 11 days, then calculated the participants’ typical daily physical activity, energy expenditure and resting metabolic rates. They then compared those numbers with the same measures for an average male and female Westerner.

It’s long been believed that a hunter-gatherer lifestyle involves considerable physical activity and therefore burns many calories, far more than are incinerated by your average American office worker each day. And it was true, the scientists determined, that the Hadza people in general moved more than many Americans do, with the men walking about seven miles a day and the women about three.

The implication, the scientists concluded, is that “active, ‘traditional’ lifestyles may not protect against obesity if diets change to promote increased caloric consumption.” That is, even active people will pack on pounds if they eat like most of us in the West.

The underlying and rather disheartening message of that finding, of course, is that physical activity by itself is not going to make and keep you thin. (It’s worth noting that the Hadza people were almost uniformly slight.)

The overarching conclusion of that study, which was published last week in the journal PLoS One, is not really new or surprising, says Dr. Timothy Church, who holds the John S. McIlhenny Endowed Chair in Health Wisdom at the Pennington Biomedical Research Center in Louisiana and who has long studied exercise and weight control. “It’s been known for some time that, calorie for calorie, it’s easier to lose weight by dieting than by exercise,” he says.

People stick with low-calorie diets more readily than they continue with exercise to drop pounds.

And another newly published and fascinating review, by Dr. Church and others, goes some way to explaining why. Its main point: As in the Hadza study, human metabolism appears to be less revved by activity than was once believed.

“There’s this expectation that if you exercise, your metabolism won’t drop as you lose weight or will even speed up,” says Diana Thomas, a professor of mathematics at Montclair State University in New Jersey, who led the study.

But she says close mathematical scrutiny of past studies of exercise and weight loss shows that that happy prospect is, sad to say, unfounded. One of the few studies ever to have scrupulously monitored exercise, food intake and metabolic rates found that volunteers’ basal metabolic rates dropped as they lost weight, even though they exercised every day. As a result, although they were burning up to 500 calories during an exercise session, their total daily caloric burn was lower than it would have been had their metabolism remained unchanged, and they lost less weight than had been expected.

The problem for those of us hoping to use exercise to slough off fat is that most current calculations about exercise and weight loss assume that metabolism remains unchanged or is revved by exercise.

So Dr. Thomas has helpfully begun to recalibrate weight loss formulas, taking into account the drop in metabolism. Using her new formulas, she’s working with a group of volunteers at Pennington, providing them with improved predictions about how much weight they can expect to lose from exercise.

The predictions are proving accurate, she says, and although her forecast is for less weight loss than that under the old formula, the volunteers are pleased. “It’s better to meet lower expectations,” she says, “than to be disappointed that you’re not losing what you supposedly should.” (You can find a basic version of the revised weight loss calculator here.

She is perhaps her own best advertisement. In the past few years, she’s shed 70 pounds and, using her formulas for how many calories she’s actually burning each day thanks to a daily walk, has regained none of it.

Gretchen Reynolds is the author of “The First 20 Minutes: Surprising Science Reveals How We Can Exercise Better, Train Smarter, Live Longer” (Hudson Street Press, 2012).
Request An Appointment
Watch Our Video
Read Our Blog