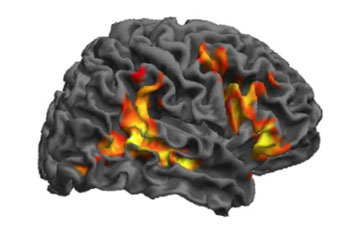 By BONNIE PRESCOTT
January 29, 2013
A patient’s relationship with his or her doctor has long been considered an important component of healing. Now, in a novel investigation in which physicians underwent brain scans while they believed they were actually treating patients, researchers have provided the first scientific evidence indicating that doctors truly can feel their patients’ pain—and experience their relief following treatment.Led by HMS researchers at Massachusetts General Hospital and the Program in Placebo Studies and Therapeutic Encounter at Beth Israel Deaconess Medical Center, the new findings, which appear on-line today in Molecular Psychiatry, shed light on one of the more intangible aspects of health care: the doctor-patient relationship.

“Our findings showed that the same brain regions that have previously been shown to be activated when patients receive placebo therapies are similarly activated in the brains of doctors when they administer what they think are effective treatments,” explained first author Karin Jensen, HMS research fellow in the Department of Psychiatry and Martinos Center for Biological Imaging at Mass General. She is also a member of the Program in Placebo Studies. Notably, she said, the physicians who reported greater ability to empathize with their patients’ feelings experienced higher satisfaction during the patients’ treatments, as reflected in the brain scans.

“By demonstrating that caring for patients involves a complex set of brain events, including deep understanding of the patient’s facial and body expressions, possibly in combination with the physician’s own expectations of relief and feelings of reward, we have been able to elucidate the neurobiology underlying caregiving,” said senior author Ted Kaptchuk, HMS associate professor of medicine and director of the Program in Placebo Studies. “Our findings provide early evidence of the importance of interacting brain networks between patients and caregivers and acknowledge the doctor-patient relationship as a valued component of health care, alongside medications and procedures.”

Previous investigations have demonstrated that a brain region associated with pain relief (the right ventrolateral prefrontal cortex, or VLPFC) and a region associated with reward (the rostral anterior cingulate cortex, or rACC) are activated when patients experience the placebo effect, which occurs when patients show improvement from treatments that contain no active ingredients. The placebo effect accounts for significant portions of clinical outcomes in many illnesses, including pain, depression and anxiety.

Although behavioral research has suggested that physicians’ expectations influence patients’ clinical outcomes and help determine patients’ placebo responses, until now little effort has been directed to understanding the biology underlying the physician component of the clinical relationship. Jensen and her colleagues hypothesized that the same brain regions that are activated during patients’ placebo responses—the VLPFC and rACC—would similarly be activated in the brains of physicians as they treated patients. They also hypothesized that a physician’s perspective-taking skills would influence the outcomes.

To test these hypotheses, the scientists developed a unique equipment arrangement that would enable them to conduct functional magnetic resonance imaging (fMRI) of the physicians’ brains while the doctors had face-to-face interactions with patients, including observing patients as they underwent pain treatments.

The experiment included 18 physicians representing nine medical specialties, all of whom had received their medical degree within the last 10 years. Two 25-year-old females played the role of patient and followed a rehearsed script. The experiment called for the participating physicians to administer pain relief with what they thought was a pain-relieving electronic device, but which was actually a non-active, sham device.

To ensure that the physicians believed that the sham device really worked, the investigators first administered a dose of “heat pain” to the physicians’ forearms to gauge pain threshold and then “treated” them with the fake machine. During the treatments, the investigators reduced the heat stimulation, to demonstrate to the participants that the therapy worked. The physicians underwent fMRI scans while they experienced the painful heat stimulation so that investigators could see exactly which brain regions were activated during first-person perception of pain.

In the second portion of the experiment, each physician was introduced to a patient and asked to perform a standardized clinical examination, which was conducted in a typical exam room for approximately 20 minutes. (The clinical exam, comparable to a standard U.S. doctor’s appointment, was performed in order to establish a realistic rapport between the physician and patient before fMRI scanning took place.) At this point the physician also answered a questionnaire, the Interpersonal Reactivity Index, used to measure the participant’s self-reported perspective-taking skills.

During the third step, the physician and patient were led into the scanner room. “The physician went inside the scanner and was equipped with a remote control that could activate the ‘analgesic device’ when prompted,” Jensen said. Mirrors inside the scanner enabled physicians to maintain eye contact with the patient, who was seated on a chair next to the scanner’s bed and hooked up to both the thermal pain stimulator and the pain-relieving device.

Following the scanning session, the physicians were removed from the scanner and told exactly how the experiment had been performed. “If the physician did not agree with the deceptive component of the study, they were given the opportunity to withdraw their data,” Jensen. “No one did this.”

As predicted, the authors found that while treating patients, the physicians activated the right VLPFC region of the brain, a region previously implicated in the placebo response. Furthermore, Jensen said, the physicians’ ability to take the patients’ viewpoints correlated to brain activations and subjective ratings: Physicians who reported high perspective-taking skills were more likely to show activation in the rACC brain region, which is associated with reward.

“We already know that the physician-patient relationship provides solace and can even relieve many symptoms,” Kaptchuk said. “Now, for the first time, we’ve shown that caring for patients encompasses a unique neurobiology in physicians. Our ultimate goal is to transform the ‘art of medicine’ into the ‘science of care,’ and this research is an important first step in this process as we continue investigations to find out how patient-clinician interactions can lead to measurable clinical outcomes in patients.”

Adapted from a BIDMC and Mass General news release.