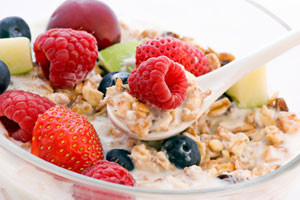 A new study appears to confirm that when you eat is just as important for health as what and how much you eat.

US researchers asked men to complete questionnaires about what they ate and when they ate it, then tracked their health for 16 years. Those who said they skipped breakfast were found to have a higher risk of heart attack or fatal coronary heart disease.

Lead author Leah Cahill, of the Harvard School of Public Health (HSPH), and colleagues, write about their findings in a July 23rd  issue of the American Heart Association journal Circulation.

In a statement, Leah Cahill, who is a postdoctoral research fellow in the department of nutrition at HSPH, explains what may lie behind  the findings:

“Skipping breakfast may lead to one or more risk factors, including obesity, high blood pressure, high cholesterol and diabetes, which may in turn lead to a heart attack over time.”

For their study the researchers analyzed food frequency questionnaires completed by 26,902 male health professionals aged between  45 and 82 years and tracked their health for 16 years from 1992 to 2008. The men were free of heart disease and cancer at the  start of the study.

Men who skipped breakfast had other risk factors

The men who said they skipped breakfast tended to be younger, single, smokers, who worked full time, did not do much exercise and drank more alcohol.

The researchers also found when they adjusted the results to take out the effect of body mass index, high blood pressure, high cholesterol and diabetes, the links between skipping breakfast and higher risk for heart attack or death from coronary heart disease  became much weaker: they were no longer statistically significant.

They note this suggests “eating habits may affect risk of coronary heart disease through pathways associated with these  traditional risk factors.”

They also found no links between how many times a day the men said they ate and risk of coronary heart disease.

But the authors note that, judging by the few men in the study who ate late at night, this was unlikely to be a major public health concern.

Leah Cahill says the message from the study, which reinforces previous research, is: “Don’t skip breakfast.” Eating a healthy meal at the start of the day is linked to lower risk of heart attacks.

Incorporate many types of healthy foods into your breakfast, Leah Cahill advises – as this is “an easy way to ensure your meal provides adequate energy and a healthy balance of nutrients, such as protein, carbohydrates, vitamins and minerals.”

Adding nuts and chopped fruit to cereal is “great way to start the day,” the authors say

If eating a bowl of cereal, try adding nuts and chopped fruit, or steel-cut oatmeal. This is a “great way to start the day,” Leah Cahill adds.

Senior author Eric Rimm, associate professor of medicine at the Harvard Medical School, says the team has spent decades looking at the effects of quality and composition of diet on health, and now this new study suggests overall dietary habits should also be considered in lowering risk of heart disease.

At a conference in 2012, UK scientists presented a study that explained why people who skip breakfast tend to find high calorie food more appealing later in the day: their brain circuits may be primed toward seeking it when fasting.

The British Heart Foundation’s senior dietitian, Victoria Taylor, has responded to the current research news on breakfast benefits. She says:

“In the morning rush it can be all too easy to skip breakfast, but this study suggests this could have a bigger impact on our health than we might think.

However, these researchers only looked at men aged over 45, so we would need to see further research to confirm that breakfast has the same impact on the heart health of other groups of people.”

“What we do know is that a healthy and filling breakfast can make that mid-morning biscuit less tempting, as well as giving you another opportunity to widen the variety of foods in your diet.

“Wholegrain toast, or cereals like porridge with low-fat milk are a good way to start the day. Try a sliced banana or dried fruit on top and you’ll be on your way to five-a-day before you’ve even left the house.”