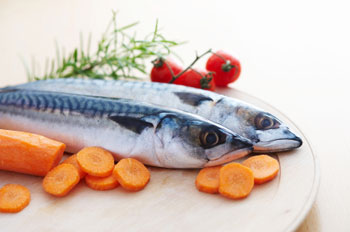 Eating one portion of fatty fish every week, or four of lean fish, could halve the risk of developing rheumatoid arthritis, according to a study published in the journal Annals of the Rheumatic Diseases.

Researchers from the Karolinska Institute in Sweden sent a questionnaire to all women between 1987 and 1990 who were a part of The Swedish Mammography Cohort Study and born between 1914 and 1948.

The questionnaires requested information on their diet, height, weight, parity and educational level.

In 1997, a follow-up questionnaire was sent to 56,030 women still alive requesting the same information, but with additional information on smoking history, physical activity, and use of dietary supplements and aspirin.

As part of the dietary information request, the women were asked to complete food frequency questionnaires about how often they ate a choice of 67 foods in 1987, and 96 foods in 1997. These choices included a variety of lean and fatty fish.

Around 32,000 of the women had their health monitored between 2003 and 2010. Of these women, 205 were diagnosed with rheumatoid arthritis.

The results showed that across the study group overall, the women with the highest consumption of omega-3 polyunsaturated fatty acids (PUFAs) had four times higher intake than those with the lowest intake.

Of the women who developed arthritis, 27% had a dietary omega-3 PUFAs intake of less than 0.21g a day.

The women who exceeded 0.21g a day – the equivalent to a minimum of one serving of fatty fish, or four servings of lean fish a week – in both 1987 and 1997 had a 52% lower risk of developing rheumatoid arthritis.

Overall, eating more than one serving of all types of fish every week for a minimum of 10 years was linked to a 29% reduced risk of arthritis when compared with eating less than one portion a week.

Additionally, the results showed that women who consumed the least omega-3 PUFAs included the highest number of smokers and the lowest proportion of alcohol drinkers and aspirin takers.

Arthritis is a disease that affects the musculoskeletal system, causing swelling, inflammation and stiffness of the joints. It is common in people aged over 50 years.

Rheumatoid arthritis is one of the most common forms of the disease, mainly affecting the fingers, arms, legs and wrists.

According to the Centers for Disease Control and Prevention (CDC), around 50 million adults in the US suffer from some form of arthritis. It is estimated that by 2030, 67 million Americans will have developed the disease.

The researchers note that the results of this research sit in line with guidelines presented by the American Dietary Guidelines Advisory Committee, who suggest “eating seafood twice per week to get an average daily intake of 250mg of omega-3 fatty acids in the diet.”

The following oily and lean fish are recommended in order to boost omega-3 fatty acids in the diet:

Eating one portion of fatty fish, such as mackerel or salmon, could cut your risk of developing rheumatoid arthritis by 50%

However, the researchers note they did not see a link between the use of omega-3 supplements and the decrease in risk of arthritis, but they add that the number of cases were limited in which supplements were used.

“The study indicates a potentially important role for dietary long-chain n-3 (omega 3) PUFAs in the aetiology of rheumatoid arthritis, and that adherence to existing dietary guidelines regarding ﬁsh consumption may also be beneﬁcial in terms of RA risk.”

Another study from Michigan Technological University found that omega-3 oils could help protect the heart from mental stress.