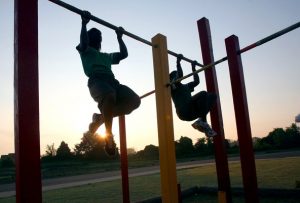 Sold on the Feeling, if Not the Benefits to Health

Almost everyone has gotten the message that exercise is important for health. Yet most who start exercise programs stop. Perhaps, researchers say, the way to persuade more people to exercise is to study those rare individuals who love it.

What makes someone a committed exerciser? And how motivating are the much vaunted improvements to health?

Recently these questions have became more urgent. This month, a group of exercise researchers published an analysis of five rigorous studies reporting that about 10 percent of people have an “adverse response” to exercise. In them, at least one cardiovascular risk factor got worse instead of better.

Some exercise and public health experts worried that people might use the findings as an excuse not to exercise. But that assumes that exercisers are motivated largely by health concerns to begin with.

“When a physician tells a patient, ‘You need to make a change for your health,’ that can be motivating, especially if the person has a health problem,” said Rodney Dishman, director of the exercise psychology laboratory at the University of Georgia. “But it usually wanes over time. People don’t feel their bones getting stronger, they don’t feel lipids changing, they don’t feel their blood pressure changing.”

Most who start exercising say the goal is to lose weight or improve their health. But those who begin on the promise of imperceptible health effects often stop, Dr. Dishman said, saying they do not have time, or are too tired after work, or they just lost interest.

And there are no good studies investigating why people keep exercising. Dr. Dishman and others suspect the motivation is sheer pleasure — feeling energized, a boost in mood, feeling restless and uncomfortable without exercise. And you may not be able to will yourself to have this response.

Biological traits, Dr. Dishman says, “seem to play a bigger role in both the choice to be active and the outcomes of being active than folks — namely public health advocates— have been willing to admit.”

Dr. Dishman cites himself as an example of someone who craves exercise. Until about five years ago, he was an avid runner. Then his knee failed him — severe osteoarthritis — and he has not been able to run since. He still has dreams that he is running.

But instead of giving up on exercise, he rides a stationary bike simply because working out feels so good to him.

“If I can feel better after 30 minutes of riding in my office, alone, going nowhere, it has got to be something about exercise,” he said. But for him, as for many others, slow, moderate exercise does not bring the same physical pleasure. It must be hard exercise, meaning it has to require real effort, the sort of workout that makes people breathe hard and drip with sweat, Dr. Dishman says.

Many scientists and doctors who are avid exercisers — and who know and understand the medical science — say they were never motivated by the thought of improving their heart risk factors.

Barry Zirkin, a reproductive biologist at Johns Hopkins University’s Bloomberg School of Public Health, craves his sport — basketball — to the point that three partial tears in each Achilles’ tendon did not keep him from it.

His orthopedist told him to stop. “He knew I wouldn’t stop,” Dr. Zirkin said. “And I haven’t.”

Dr. Christine Lawless, a chairwoman of the American College of Cardiology’s Sports and Exercise Cardiology Council, was a competitive figure skater until she was in her late 40s. She was motivated by competition, by wanting to win.

Then she broke her left leg during a bad jump. She could not exercise for six months.

“I was so depressed,” Dr. Lawless said. “I knew I wasn’t going to skate again. I really had to change my mindset. I had to think about other ways to motivate myself.”

Dr. Lawless, who is now 59, exercises for about an hour a day five days a week, through yoga and walking and lifting weights. She says her motivation now is a desire to stay active and flexible for the rest of her life. But for her, like Dr. Dishman and Dr. Zirkin, exercise also is an innate pleasure, important to her sense of well-being.

“I feel like I haven’t had a good day unless I exercise,” Dr. Lawless said.

Perhaps it is wrong to think that the way to encourage people to exercise is to emphasize the benefits to their health, Dr. Dishman said. But what about a medical scientist who actually has heart disease? Would an adverse exercise response make a difference?

That’s him, says Dr. Robert Green of Harvard Medical School. He used to run, but eventually his joints could not take it. So he rides a bicycle and swims instead.

Adverse effects, he said, would not deter him. What does it actually mean to say your blood pressure goes up by a few points with exercise, he asks. There are no data on long-term health effects, like heart attacks and strokes, in exercisers who have adverse responses.

So he simply does not care. Exercise makes him feel good. And if he were to have an adverse effect, like a rise in blood pressure?