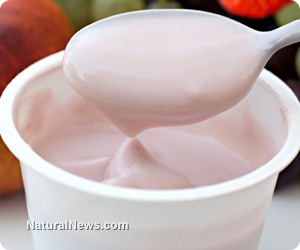 (NaturalNews) Yogurt, fruit, and insect juice? This last ingredient might seem  out of place, but it is precisely what global food giant Dannon is adding as a  food coloring to many of its commercial yogurt products, unbeknownst to the  majority of its customer base. And the non-profit consumer advocacy group  Center for Science in the Public Interest (CSPI) is calling on the  company to immediately remove the ingredient from its product formulations in  the interest of public safety.
You may recall back in 2012 when coffee  chain Starbucks found itself in the national spotlight for quietly replacing a  plant-based coloring agent with carmine, a substance that is extracted from  ground-up cochineal beetles, in some of its Frappuccino beverages. Well, this  same ingredient is now being used by Dannon to doctor up some of its more  colorful yogurt flavors and make them more appealing to the eye, which is  generating new controversy.
According to CSPI, the carminic acid-derived  coloring agent is not only deceptive by default, but it is also known to cause  allergic reactions in some people. The group’s Chemical Guide, in fact,  recommends that consumers be cautious about the foods they eat as added carmine  can cause severe allergic reactions, including anaphylactic shock. This may be  why Dannon already avoids using carmine in its yogurt lines aimed at  children.
“I have nothing against people who eat insects, but when I buy  strawberry yogurt I’m expecting yogurt and strawberries, and not red dye made  from bugs,” says CSPI Executive Director Michael F. Jacobson. “Given the fact  that it causes allergic reactions in some people, and that it’s easier to use  safer, plant-based colors, why would Dannon use it at all? Why risk offending  vegetarians and grossing out your other customers?”
Safer alternatives to  carmine include things like purple carrot juice, beet root, and various other natural, plant-based dyes  that many “natural” and organic food producers are already using. These coloring  alternatives, of course, are infinitely safer than the many petroleum-based food  colorings commonly used in conventional food products, which have been linked to  causing attention deficit hyperactivity disorder (ADHD) and other behavioral  problems in children.

CSPI has created an online petition at TakePart.com that  urges Franck Riboud, CEO of Groupe Danone, Dannon’s parent company, to  immediately replace carmine with more natural fruit, which already contains  natural coloring. If the company does not wish to do this, CSPI hopes the Dannon  will at least label its yogurts as containing the insect-based dye.
You  can access and sign the CSPI petition here: http://takeaction.takepart.com
Carmine is not the  only major concern with Dannon yogurt, though. According to the company’s  “What’s in Our Yogurt?” page, many Dannon yogurt products contain added  artificial flavors, genetically-modified organisms (GMOs), and aspartame, a  synthetic sweetening agent originally derived from a chemical warfare agent.  Monsanto used to own the patent for aspartame.
“Three congressional  hearings and countless research reports and papers by renowned doctors confirm  the deadly chemistry of aspartame,” writes Dr. Betty Martini, D.Hum., concerning  the dirty truth about aspartame. “FDA listed 92 adverse reactions, including  death, in [its] report on 10,000 … complaints volunteered by American  consumers.”
Then there is the issue of GMOs in Dannon  yogurt, which hide behind ingredients like cornstarch, fructose, and  so-called “mineral compounds,” which may be derived from synthetic, GMO-based  sources. Even the milk used to make Dannon yogurt is problematic, as it more  than likely comes from cows raised in concentrated animal feeding operations  (CAFOs) and fed GMO feed.
You can view the full ingredient list for  Dannon yogurt here: http://www.dannon.com
Sources for this article  include:
http://cspinet.org
http://www.naturalnews.com
http://www.dannon.com
http://www.naturalnews.com
http://dorway.com
http://science.naturalnews.com
http://science.naturalnews.com
http://science.naturalnews.com
Learn more:  http://www.naturalnews.com/041430_bug_juice_food_coloring_Dannon_yogurt.html#ixzz2ajkdsD00