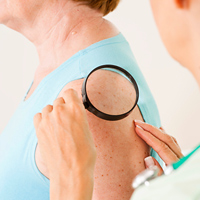 For Karen Greenberg, it all began with a pea-sized lump in her armpit. Greenberg’s dermatologist diagnosed folliculitis, or an infected hair follicle. A few days later, a similar lump appeared on her forehead. A visit to the doctor revealed that Greenberg had shingles, a painful virus that strikes nearly one million Americans every year.

“I had heard of shingles, but… figured I didn’t need to worry about it until I was much older,” said Greenburg, 38, who was diagnosed two years ago.

Shingles is brought on by the same herpes zoster virus that causes chickenpox. Once a person develops chickenpox, the virus can lay dormant for years and suddenly “reactivate” as shingles. Like chickenpox, shingles produces fluid-filled blisters, but the rash will follow a nerve on one side of the body and cause intense pain.

“People really don’t know how painful it is until they get it themselves, or a close friend or relative gets it,” said Kristin Englund, MD, a member of the department of infectious disease at the Cleveland Clinic. “It’s not just an irritating rash you have for a week or two. It’s very painful and debilitating.”

Aside from the rash, Greenberg had a “headache, non-stop” for nearly five weeks. She developed a severe side effect, postherpetic neuralgia, which causes pain in the area of the infected nerves that can last for months or years.

“Shingles is portrayed as a rash that’s painful, but the full impact isn’t explained,” said Greenberg, who lives in Arizona.

Shingles typically affects older people, but it can strike at any age. Patients with weakened immune systems from leukemia, cancer, or HIV are especially susceptible. It’s not contagious to people who have had chickenpox, but the herpes zoster virus can be spread to someone who has never had chickenpox.

Antiviral medications can shorten the duration of the rash, but there is no treatment for eliminating the virus. Home remedies such as wet compresses, calamine lotion, and oatmeal baths may help ease the pain associated with the rash.

Having shingles doesn’t guarantee immunity from a recurrence. “The body does somewhat immunize itself against shingles, but there is a risk of getting it again,” said Dr. Englund. “We still recommend all people over the age of 60 get the shingles vaccine, whether they’ve had [shingles] or not.”

Zostavax, a vaccine approved by the Food and Drug Administration for people 50 and older, has been shown to provide some protection against shingles and reduce the risk of postherpetic neuralgia.

“Most vaccines are designed to prevent germs from infecting a person,” said Sharon Humiston, MD, associate director for research at the Immunization Action Coalition and professor of pediatrics at the University of Missouri-Kansas City School of Medicine. “The shingles vaccine is designed to fight off flare-ups of a virus that already infected the person years ago. So the shingles vaccine has a much harder job, in a certain sense.”

Greenberg hopes that having her two daughters vaccinated against chickenpox will lower their chances of getting shingles later on. “At the time, I thought I was giving my daughters immunity against an irritating and annoying virus that every kid of my generation dealt with,” said Greenberg. “I didn’t realize how serious chickenpox was, much less shingles, and then I didn’t even know what shingles was.”

For Greenberg, the lingering effects of shingles make everyday tasks more challenging. The nerve damage in her feet prevents her going to the gym six days a week like she used to, but she’s discovered a passion for disc golf. After only being able to wear athletic shoes, she recently found a pair of regular shoes that are comfortable.

“I literally cried on the way home from buying these shoes,” she said. “To be able to dress with confidence will mean so much to me.”