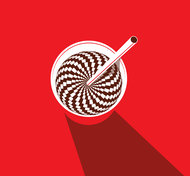 The average person makes more than 200 decisions about food every day, and most of the time isn’t even aware of it. We may take a stand each morning when it comes to ordering a tall, nonfat, no-foam latte, but for the most part, we tend to consume what’s put in front of us. When we eat out, everything from a restaurant’s lighting to the menu design to the size of the plate or cup influences how much we eat and drink.

But when Mayor Michael Bloomberg proposed a ban on supersize soft drinks in New York last month, the restaurant and beverage industries argued that people are in control of what they consume. “We trust our customers to make the choices that are best for them,” McDonald’s tweeted.

Recently, Pierre Chandon, a French marketing professor and visiting Harvard Business School scholar, decided to test the idea that consumers know what’s best for them. He asked 294 people to estimate — using photos of a 6.5-ounce bottle (the standard for decades), a 12-ounce can or a 12-ounce cup as benchmarks — how much liquid was in a range of cups, starting at 12 ounces all the way up to a 50-ounce “Double Gulp.” While it sounds simple, respondents consistently guessed wrong, assuming that the larger cups held about 20 percent to 40 percent less liquid than they actually did. Dozens of other studies, using jelly beans, popcorn, ice cream and alcoholic drinks, have also shown that consumers can’t be depended on to perceive serving sizes accurately.

The reason comes down to the fact that the human brain has a surprisingly tough time with geometry and often can’t accurately gauge when an object has doubled or even tripled in size. It’s even trickier when the object is a wide-mouth cup, larger on the top than the bottom. “We tend to underestimate the increase in the size of any object,” said Professor Chandon, director of the Insead Social Science Research Center in Paris. “When you double the size of something, it really looks just 50 to 70 percent bigger, not twice as big.”

In one study, dietitians were asked to estimate calories in three fast-food meals. The baseline meal consisted of a three-inch ham sandwich, six chips and a 10-ounce cup of soda. The portion size was doubled in the second meal and doubled again in the third meal. Yet even the dietitians failed to see it, guessing 13 percent to 26 percent too low on the calorie counts. Of course, each of these mistakes is small on its own, but over time, our errors in portion perception can add up. For a weekly moviegoer who orders a supersize soda to sip on, the misperception translates to about 8,000 unintended calories a year.

How good are you at judging serving sizes? Take The Well Quiz: Supersize Soft Drinks to find out.