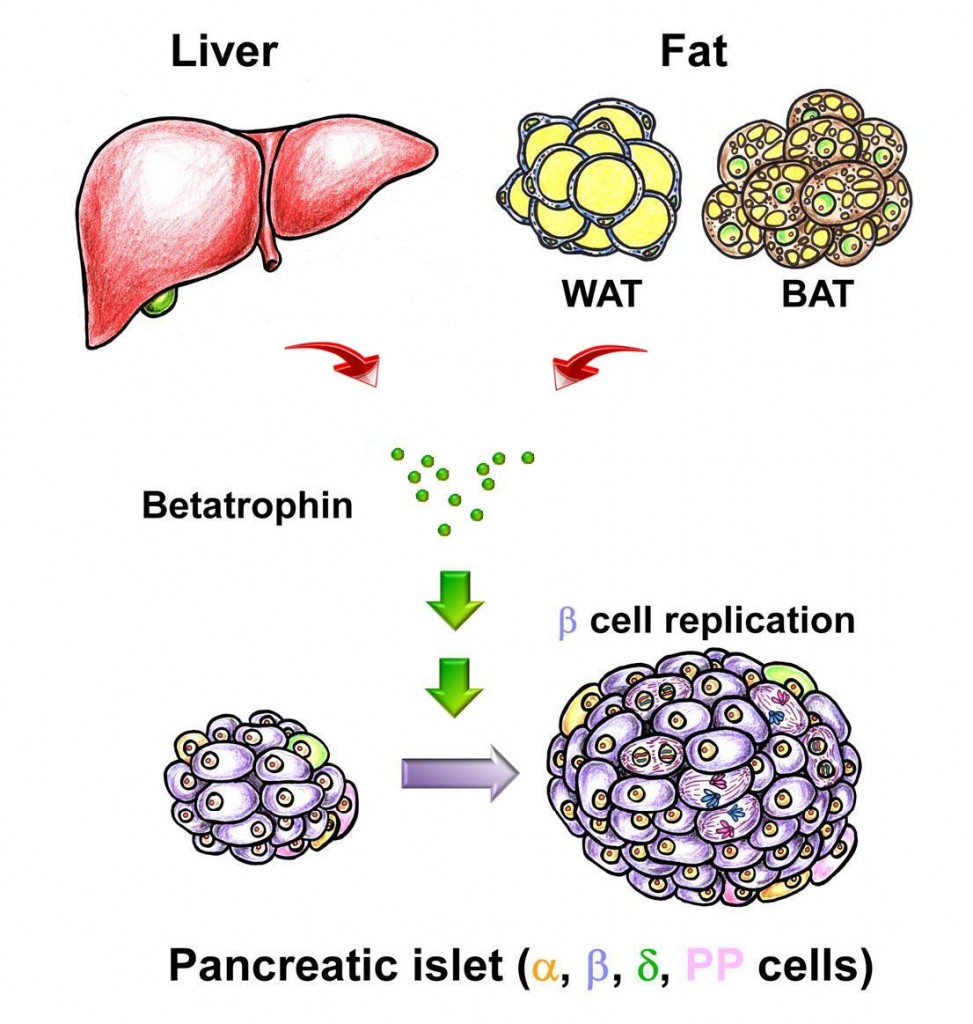 Type 2 diabetes (T2D) has arguably reached epidemic levels in this country; between 22 and 24 million people suffer from the disease. But now there’s an exciting new development: scientists at the Harvard Stem Cell Institute have discovered a hormone that might slow or stop the progression of diabetes [1].

T2D is the most common type of diabetes, accounting for about 95% of cases. The hallmark is high blood sugar. It is linked to obesity, which increases the body’s demand for more and more insulin. T2D develops when specific insulin-producing cells in the pancreas, called beta cells, become exhausted and can’t keep up with the increased demand. With insufficient insulin, blood glucose levels rise. Over time, these high levels of glucose can lead to heart disease, stroke, blindness, kidney disease, nerve damage, and even amputations. T2D can be helped by weight loss and exercise, but often oral medication or insulin shots are ultimately needed.

Treating diabetes costs the U.S. a veritable fortune. Last year the bill came to $245 billion [2]—that’s $176 billion in direct medical costs and another $69 billion in lower productivity. We need a game changer. The new discovery just might lead to that, though it won’t happen overnight.

The NIH-funded researchers set out to try to identify a signal that seems to be sent by the liver to the beta cells when the insulin receptor is blocked and blood glucose levels rise.  The researchers found that after the insulin receptor was blocked, one particular liver gene increased its activity rather dramatically. They were able to show that this gene, which turned out to be one of the 20,000 genes that hasn’t attracted much attention so far, coded for a secreted protein. Because it helps beta cells grow, they named it “betatrophin.” This work was done in the mouse, but there’s an almost identical counterpart in the human. When the researchers engineered normal healthy mice to manufacture more of the hormone in their livers, the pancreas responded and made more insulin-producing beta cells.

Betatrophin sends the beta cells into a frenzy causing them to replicate as much as 30 times their normal rate! No other chemical or natural protein has ever caused such a dramatic boost in beta cell proliferation.

It’s not every day that a new and important hormone is discovered! But betatrophin has an important normal role in maintaining normal glucose levels. The amount of betatrophin produced in the liver (and in fat cells) rises naturally whenever the body needs to expand its inventory of beta cells: for example, during pregnancy, when the mother’s body needs to make more beta cells to accommodate the demands of the fetus.

The next step will be to see whether these extra beta cells, produced by administration of betatrophin, can produce enough insulin to halt and possibly reverse the disease in sick diabetic mice. If all goes well, we could be testing betatrophin in humans within two or three years.

Betatrophin could also help treat type 1 diabetes, which develops because the immune system attacks and destroys the insulin-producing beta cells in the pancreas. Currently, the only treatment for type 1 diabetes is insulin shots. But the researchers suspect that betatrophin might work during a critical time called the “honeymoon” period, which is a short window after the onset of disease but before all the patients’ beta cells have been wiped out.

In the future, rather than taking three insulin shots every day to treat their disease, people with T2D might receive a weekly or monthly betatrophin injection to produce more beta cells and keep their blood sugar at a healthy level. That would be a true paradigm shift in the treatment of this disease.

NIH support: The National Institute of Diabetes and Digestive and Kidney Diseases