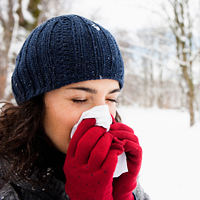 Patients with a cough or bronchitis are often prescribed antibiotics, and previous studies have had conflicting results about their effectiveness. For this study, researchers randomly assigned more than 2,000 adults complaining of a cough to take either the antibiotic amoxicillin for a week or an inactive placebo.

Overall, the antibiotic was no more effective at relieving symptoms or their duration than the placebo, the study found. The findings also held among people who were older than 60.

“The main message here is that antibiotics are usually not necessary for respiratory infections, if pneumonia is not suspected,” said Dr. Philipp Schuetz of the Kantonsspital Aarau in Switzerland.

“Only a few patients benefit from antibiotics and these may be identified with new blood tests for bacterial infections,” said Schuetz, who wrote an editorial accompanying the study. “Physicians and patients should generally refrain from antibiotic use, yet, if they feel unsure, the blood test helps them to further minimize risks.”

Study participants were 18 and older and had sought treatment for an acute cough — meaning they’d had the cough for less than a month — which is one of the most common illnesses seen by primary care doctors. There was no reason to suspect that any of them had the lung infection pneumonia, which is treated with antibiotics.

Participants took the antibiotic three times daily for seven days. While they had no better recovery than those taking the dummy pills, they were more likely to report side effects such as nausea, rash and diarrhea, according to the study, published online Dec. 19 in The Lancet Infectious Diseases.

The study is the largest to date that shows antibiotics do not help treat lower-respiratory infections, the researchers say.

Indiscriminate use of antibiotics may also pose risks, Schuetz said. “The main risk from antibiotics is related to direct side effects such as severe diarrhea,” he said. “The other risk relates to emergence of multi-resistant bacteria, which on a population level are a threat to society as antibiotics may not work properly.”

Dr. Len Horovitz, a pulmonologist at Lenox Hill Hospital in New York City, said that many patients beg for antibiotics to nip a cold in the bud. “This is not how it works,” he said. “Viruses such as the common cold do not respond to antibiotics.”

So what does work? “Comfort care, such as more sleep, drinking lots of fluids, and using a humidifier at night,” he said. “If you have a cough or lower respiratory tract infection, go to the doctor and let him examine you.” The doctor can take a culture of any mucus that comes up with the cough to see if there is a bacteria present, he explained.

“Getting antibiotics for a dry cough without taking a culture is doing a disservice,” he said. “There is no benefit and there may be a slight risk.”