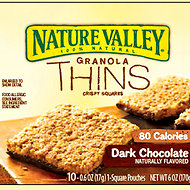 The women are seeking to turn the suit into a class action that would win the profits the company has made selling Nature Valley products that contain such ingredients.

But Amy McKendrick, one of the mothers, said she really only wanted to make other parents aware that products they were buying to avoid dyes and processed ingredients for health reasons may not be as pure as they thought based on what they read on packaging.

Kirstie Foster, a spokeswoman for General Mills, said in an e-mail that the company had not seen the lawsuit. “We are aware of the press release, but to our knowledge, we have not been served with a lawsuit,” she said, referring to a news release sent out by the plaintiffs’ lawyers.

Various surveys have found that consumers prefer foods described as “natural” to those labeled “organic,” and both segments are growing and profitable. Ironically, food labeled “organic” must meet verifiable standards set by the federal government, while that labeled “natural” has no such requirements.

The words “natural” and “nature” are used on Nature Valley packaging, and the brand’s social media presence is dominated by images of nature and wildlife. “General Mills seeks to capitalize on consumers’ preference for all-natural foods and the association between such foods and a wholesome way of life,” according to the lawsuit. “Consumers are willing to pay more for natural foods because of this association, as well as the perceived higher quality, health and safety benefits and low impact on the environment associated with products labeled as ‘natural.’ “

The lawsuit, filed in the United States District Court for the Northern District of California, charges General Mills with false advertising and anticompetitiveness under California law. It is the latest in a series of lawsuits against General Mills over labeling.

At issue are three ingredients — the sweeteners high fructose corn syrup and high maltose corn syrup, and maltodextrin, a thickener than can also impart a slight sweetness to food.

“High maltose corn syrup and maltodextrin are highly processed, do not exist in nature and not even under the most elastic possible definition could they be considered ‘natural,‘ “ said Michael F. Jacobson, executive director of the Center for Science in the Public Interest, an advocacy group that works on public health issues and is serving as co-counsel in the lawsuit.

The center said it had previously raised concerns about the “natural” claims on Nature Valley products with General Mills in 2010 and that the company had taken high fructose corn syrup out of most of them, but had not removed the other two ingredients.

The Food and Drug Administration recently denied an application by the Corn Refiners Association to change the name of high fructose corn syrup to corn sugar on nutrition labels. Consumer groups had opposed the request because some consumers have adverse reactions to the substance and might be confused by the less specific identification.

After doing some research, Ms. McKendrick, who teaches agriculture in Kern County, Calif., decided to eliminate all foods with dyes and processed ingredients from her daughter’s diet to try to control her condition. “Everything we eat is organic or all natural,” she said. “I’ve cut out all additives, preservatives, dye, everything, and after two years of doing that, she’s been released from all those diagnoses, all of them.”

Ms. McKendrick had been feeding her daughter what she thought was a wholly natural diet for some time but some lingering anxiety persisted, she said.

During that time, she had purchased Nature Valley Chewy Trail Mix Fruit & Nut Granola Bars, Nature Valley Sweet & Salty Nut Cashew Granola Bars and Nature Valley Dark Chocolate and Peanut Butter Granola Thins for her daughter believing that the “100% Natural” on the box meant they no processed ingredients in them.

Finally, after more research and scouring her Feingold Program Foodlist, a guidebook for people treating mental disorders with diets, she realized the Nature Valley products had processed ingredients in them. “I was shocked,” Ms. McKendrick said. “It’s false advertising.”