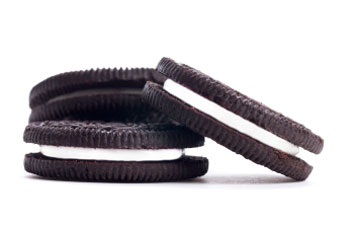 A group of students and a professor of neuroscience have discovered that Oreo cookies may be as addictive as cocaine or morphine – to lab rats at least.

Professor Joseph Schroeder and his students at Connecticut College were conducting research on the addictiveness of  high-fat and high-sugar foods, and how, for instance, they may contribute to the obesity epidemic.

“Our research supports the theory that high-fat, high-sugar foods stimulate the brain in the same way that drugs do.  It may explain why some people can’t resist these foods despite the fact that they know they are bad for them.”

One of the students, Jamie Honohan (who has since graduated with a BA in Behavioral Neuroscience), was particularly  interested in human motivation and food, and how the obesity epidemic may be linked to the prevalence of high-fat,  high-sugar foods in low-income neighborhoods. It was her idea to use Oreos, as she explains in a statement issued this  week:

“We chose Oreos not only because they are America’s favorite cookie, and highly palatable to rats, but also because  products containing high amounts of fat and sugar are heavily marketed in communities with lower socioeconomic  statuses.”

The results of their study are being presented at the Society for  Neuroscience conference that is taking place early November in San Diego, CA.

Oreo is the best selling cookie in the United States (source

For their study, the students gave Oreos to hungry rats on one side of a maze, and on the other side of the maze  they gave them a “control” food, in this case, rice cakes (Prof. Schroeder comments that like humans, rats do not seem  to relish rice cakes very much).

Then they gave the rats the option to go to either side of the maze (without the food present), and measured how  long they spent on the side where they were typically fed with Oreos compared with the side they were fed with rice  cakes.

The researchers then repeated the experiment with another group of rats. This time, instead of feeding them Oreos and rice cakes,  they injected them with addictive drugs – such as cocaine and morphine – when they were on one side of the maze, or  saline, when they were on the other side. (Prof. Schroeder is licensed to carry out this kind of experiment).

Prof. Schroeder and one of the students, Lauren Cameron, furthered the research by measuring the  expression of a protein called c-Fos in the pleasure center of the rats’ brains.

“It basically tells us how many cells were turned on in a specific region of the brain in response to the drugs or  Oreos,” Prof. Schroeder explains.

They found Oreos stimulated many more neurons than cocaine or morphine. This is in line with the findings of the  earlier behavioral experiments and supports the idea that the high-fat, high-sugar foods are addictive.

In 2011, a team from Yale University reported finding that food addiction and substance dependence have similar  brain activity.

And finally, one interesting observation – it seems that just like humans, rats eat the middle of an Oreo first.