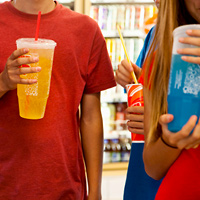 Sugary Drinks Could Be Linked to 180,000 Deaths Worldwide

Researchers associated sugar-sweetened beverages to tens of thousands of deaths from cancer, heart disease, and type 2 diabetes in a new global study, but some experts are skeptical about how they arrived at the numbers.

TUESDAY, March 19, 2013 — Sugar-sweetened sodas, sports drinks, and fruit drinks are associated with about 180,000 deaths around the world each year, according to epidemiological research presented at the American Heart Association’s Epidemiology and Prevention/Nutrition, Physical Activity and Metabolism 2013 Scientific Sessions.

But that number may not mean much, said Steve Nissen, MD, a cardiologist at the Cleveland Clinic. He described studies like this as scientifically weak because they’re extrapolating the effects of sugary drinks on mortality without examining data that may directly link deaths to sugar-sweetened drink intake. Because it’s an epidemiological study, it does not prove a cause-and-effect relationship between sugar-sweetened drinks and mortality; it just associates the two, based on the known negative metabolic effects of sugary drinks.

The AHA researchers arrived at their numbers by calculating how many sugar-sweetened drinks are consumed around the world, the effects of this consumption on obesity and type 2 diabetes, and the impact of obesity and diabetes-related deaths. Using this data, they estimated that sugar-sweetened beverages are linked to 133,000 diabetes deaths, 44,000 heart disease deaths, and 6,000 cancer deaths each year.

The American Beverage Association went even farther than Dr. Nissen in critiquing the AHA study, saying in a statement: “In no way does [this study] show that consuming sugar-sweetened beverages causes chronic diseases such as diabetes, cardiovascular disease or cancer — the real causes of death among the studied subjects. The researchers make a huge leap when they illogically and wrongly take beverage intake calculations from around the globe and allege that those beverages are the cause of deaths which the authors themselves acknowledge are due to chronic disease.”

Reason for Concern About Sugary Beverages?

Although the new data merely associated sugar-sweetened drinks with deaths from disease, it’s a biologically plausible link that should serve as a cautionary tale to consumers, said Rachel K. Johnson, PhD, MPH, RD, a spokesperson for the AHA who did not work on the study. “The link between heart disease, diabetes, and sugar-sweetened drinks has been well-established,” she said. “This is just more evidence that consuming sugary beverages in excess is harmful, so the bottom line is to avoid sugary drinks.”

The AHA recommends taking in no more than 450 calories, or 36 ounces, of sugar-sweetened beverages, including fruit drinks, sports drinks, and sodas, each week — a recommendation in line with New York City’s controversial ban on the sale of sugary drinks larger than 16 ounces, which was overturned by a New York County Supreme Court justice earlier this month. A series of industry associations and organizations filed a petition in October to block the New York ban from taking effect, saying the link between sugar-sweetened beverages and obesity was tenuous at best.

To put the 180,000 sugar-linked deaths in perspective, each year, 17.3 million people die from cardiovascular disease around the world — many from heart attacks and strokes — according to the World Health Organization. More than 2.5 million deaths are linked to alcohol worldwide annually, while 1.24 million people die in car accidents, the WHO reports.