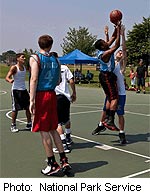 MONDAY, May 14 (HealthDay News) — Young men who play load-bearing sports such as basketball and volleyball have a reduced risk of osteoporosis later in life, according to a new study.

Researchers measured the bone mass of more than 800 men aged 18 to 20 and collected information about their exercise habits. Five years later, the men again underwent bone scans and reported their physical activity levels.

Men who did a lot of load-bearing activities at the start of the study and those who increased their amounts of exercise during the five years had a better chance of building bone than those who weren’t as active.

Thinning hip bones are more likely to break later in life, and hip fractures in men can lead to serious disability and complications, said the authors of the study, which was published in the May issue of the Journal of Bone and Mineral Research.

“Men who increased their load-bearing activity from age 19 to 24 not only developed more bone, but also had larger bones compared to men who were sedentary during the same period,” senior study author Dr. Mattias Lorentzon, of the University of Gothenburg in Sweden, said in a journal news release.

Bigger bones with more mass are believed to help protect against osteoporosis, a disease in which bones become porous and weak over time and start to fracture by age 50 or later.

“Osteoporosis actually seems to get its start by age 25 when bones start to lose tissue,” Lorentzon said. “So this study sends an important message to young men: The more you move, the more bone you build.”

Lorentzon and his colleagues found that the best activities for building bone mass are basketball, volleyball, soccer and tennis. The jumping and fast starts and stops required in these sports increase the load put on the body’s bones, which encourages the formation of new bone tissue.