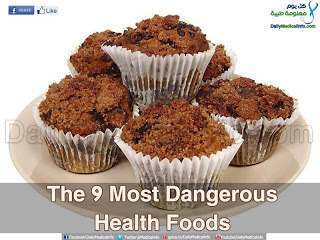 Have you ever eaten something because you thought it was healthy, but later found out that food wasn’t good for you at all? Don’t be embarrassed if the answer is “yes.” Advertising and misinformation surround what we eat and can make every food appear healthy—even if nothing could be farther from the truth. To help you distinguish food friend from food foe, we asked two registered dieticians, Lauren Antonucci and Lisa Moskovitz of Nutrition Energy, a sports performance nutrition center in New York City, to unmask some of the diet-sabotaging villains hiding behind “healthy” labels. Here are their nine worst offenders:

Protein Bars
“Protein bars are basically vitamin and protein-infused candy bars,” says Moskovitz. “They seem like a healthy snack replacement, but they can contain more than twice the amount of fat and carbs as a chocolate brownie.” To steer clear of needless calories, look for options that have less than 180 calories and 5 grams fat, and provide at least 5 grams of fiber.

Dried Fruit
With more than 100 calories per ¼ cup serving, calories can add up quickly when you’re eating dried fruit. Antonucci recommends reaching for fresh or frozen fruits instead. “You’ll be able to eat a larger, more satisfying serving for fewer calories and feel fuller from the fluids,” Antonucci says.

Yogurt
Yogurt in any form is a good source of calcium and vitamin D. But some brands have as much fat and sugar as a jelly-donut. Be sure you’re only getting the good stuff by choosing plain, low-fat versions. Flavor them on your own with fruit and honey. And go Greek when you can. Plain Greek Yogurt offers twice as much protein and half the amount of carbs as the traditional type, Moskovitz says.

Margarine
In a head-to-head battle between butter and its artificial competitor, the original wins by a landslide. Sure, the spreads have the same number of calories, but Margarine has more trans fat, which simultaneously raises your “bad” (LDL) cholesterol and lowers “good” (HDL) cholesterol, according to the Mayo Clinic. “That’s the one ingredient we dietitians recommend to avoid completely,” Moskovitz says. To limit your risk of heart disease, stick with the real stuff. And choose whipped butter, which has a lower caloric density.

Reduced-Fat Peanut Butter
When manufacturers take fat out of peanut butter, they replace it with sugars. As a result, reduced-fat peanut butter has the same total calories as the original, but more than twice the amount of carbs. “It’s better to stick with the regular stuff,” Moskovitz says. “You’ll eat less, because the full-fat version is more satisfying and filling.”

Bran Muffins
“Think of these as a decadent treat, not a healthy coffee companion,” says Antonucci. A typical bran muffin has more than 400 calories and up to 15 grams of fat, with most of the calories coming from sugar and refined flour. Can’t skip your morning muffin? The best bet is to make a lower-fat, portion controlled version at home, Antonucci says.

Fat-Free Salad Dressing
If you’re watching your blood pressure, steer clear of this stuff. “In just two measly tablespoons of fat-free Italian dressing, you take in up to 500mg of blood-pressure-raising sodium,” Moskovitz says. “That’s a third of the total amount you should eat in an entire day.” Instead, she recommends making your own low-salt dressing by combining balsamic vinegar, lemon juice, and flavor-packed seasonings like pepper, turmeric and mustard seed.

Turkey Burgers
Many people think that ordering a turkey burger instead of beef will keep them slim. Don’t be fooled. The average restaurant-style turkey burger has more than 600 calories and 30 grams of fat – and that’s without the bun or toppings. “The next time you’re wondering which burger to choose, don’t worry about the type of meat,” Moskovitz says. “Instead, limit your portion size by sharing it with a friend, or going open-faced.”

Sushi
Sushi rolls can be deceiving, because they’re packed tightly and look small, but some are calorie bombs just waiting to blow up your waistline. A single roll can pack more than 500 calories. To steer clear of these calorie-dense tripwires, Moskovitz recommends avoiding any roll that includes these ingredients: tempura (which is another word for deep fried), cream cheese, shredded cheese, or spicy mayo sauce.
source