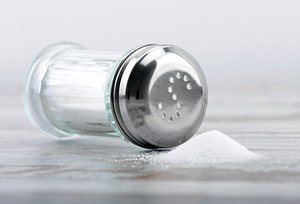 So what’s the deal with salt? You know you need some of it, but everywhere you see advertising and headlines telling you to eat less of it. You might have salt cravings but you feel guilty indulging in them because you’ve heard from everyone, the government to personal trainers to your mother-in-law, that salt is bad for you

The way headlines sound, you’d get the impression that eating a bag of chips will raise your blood pressure enough to have a stroke right then and there! I once had an 11-year old sit next to me, watch me salt my scrambled eggs and ask me if didn’t I know that salt was bad for me! So let’s see what’s actually accurate amongst all the headlines, advertising, special interests, and advice.

Like all the topics I’ve written about, it’s not that simple to say salt is “good” or bad”. One thing to keep in mind is that salt is so vital for human health that “sal” is the basis of the word “salary” because people used to be paid in salt. Sodium and chloride are both vital minerals, used for nerve transmission/impulse conduction, fluid balance, and muscle contraction. Not having enough sodium will cause hyponatremia, a life-threatening condition that happens when someone sweats out too much sodium, or drinks too much water, and upsets the fluid balance.

Salt is a prime determinant for taste in food (along with fat) and 80% of the salt we consume is in processed foods, making it difficult to avoid. The message promoted by both the National Heart, Lung, and Blood Institute (NHLBI) and the National High Blood Pressure Education Program (NHBPEP), a coalition of 36 medical organizations and six federal agencies is that everyone, not just people will hypertension, would benefit from a daily intake of 2400 mg or sodium (6 grams of salt, or about 1 teaspoon) per day, which is 4 grams less than our current average. The problem lies in the fact that the research does not conclusively show that a reduction helps with blood pressure and actually shows that low levels could lead to health problems. “You can say without any shadow of a doubt,” says Drummond Rennie, a JAMA editor and a physiologist at the University of California, “that the NHLBI has made a commitment to salt education that goes way beyond the scientific facts.”

One of the first studies that showed how diet lowered blood pressure was a Duke University clinician who, in the 1940’s, showed he could successfully treat hypertension with a low-salt, peaches-and-rice diet. If patients’ hypertension didn’t improve, Kempner said it showed, protestations notwithstanding, that the patient had clearly fallen off the diet. It was cited for decades as evidence that low sodium diets could treat hypertension, but there are a couple of very large problems that were conveniently overlooked — Kempner’s diet was also low in calories and fat, as well as high in potassium, and those are all factors that are also known to lower blood pressure.

A major problem with some of the biggest studies involving salt are that they are epidemiological studies, which are known for showing a correlation and not actual causality. As I mentioned in my article “That Study Is Wrong: The Truth About Research”, epidemiologists even suspect their own studies and call it a “pseudoscience”.   In this particular field, it would be fair to say that there is so much bias that researchers will not consider research that doesn’t support their own position, and combined with the tendency to cite research, accurate or not, creates a case that looks as if a position has more “evidence” than it actually does. For example (and there are many), in 1991, a 14-page epidemiological study was printed in the British Journal of Medicine, concluding that the salt-hypertension link was “substantially larger” than previously thought. That same year, researcher John Swales, former director of research and development for Britain’s National Health Service, dissected the study so completely that no one at the European Society for Hypertension’s conference was left unclear by how shoddy the research was.  And yet 2 years later, that same paper was cited repeatedly by the U.S. NHBPEP as compelling evidence to reduce sodium intake. In fact, Swales repeats this thought in a paper in 2000, saying, “Reviews biased by the inclusion of nonrandomized studies exaggerate the apparent blood pressure fall… Nevertheless, citation analysis shows that they are quoted much more frequently than rigorous reviews reaching more negative conclusions. This appears to be the result of an attempt to create an impression of scientific consensus.”

Here’s the first thing: there ARE some people for whom salt it problematic, but there is no test for “salt sensitivity” and even the condition itself is not fully clarified. It may be related to race (one study saw an association with African-Americans), or gender, or age, as well as a possible genetic link. However, because you cannot predict who is salt-sensitive, we’re left with creating generalized recommendations that may not actually benefit sensitive individuals, but may also harm the rest of the population.

So how does lowering salt intake cause harm? Let us count the ways, starting with cardiovascular disease. While hypertension is often blamed as a cause for heart disease, low sodium has been directly linked multiple times to increased cardiovascular deaths,  and another 2011 study confirmed this.  In fact, this last study also saw that sodium levels didn’t predict hypertension, and that any association between blood pressure and sodium didn’t actually translate into less morbidity or better survival.

Low salt diets also increase cholesterol and triglycerides in the blood.  In fact, people with Type 2 diabetes are more likely to die prematurely on a low-salt diet, due to cardiovascular disease.  A Harvard study showed that low-salt diets were linked to an immediate onset of insulin resistance.  And yet doctors are consistently recommending salt restriction diets to diabetics.

In studies with the elderly, sodium restriction can be especially damaging.  It has been shown that low salt intake leads to more falls and broken hips, and decreased cognitive abilities.  Hyponatremia (too low sodium) is commonly found in geriatric patients , and yet it is repeated ad nauseum that older people should be lowering their salt intake.

You may not realize this, but this is not necessarily new information. There have been articles in the New York Times about the dangers of low salt intake and the research supporting it in 2010 and again in 2013.

Sodium intake hasn’t changed much in decades, and that certainly seems to stand true in research: in studies measuring urinary sodium excretion, spanning 5 decades, over 30 countries, and over 50,000 subjects, the normal range of sodium excretion is 3,500 mg/day.  This last study also points out that renin-angiotensin-aldosterone system (RAAS) is a protective mechanism to PREVENT the loss of sodium. As sodium is clearly the backbone of extracellular fluid, ensures adequate blood volume, arterial pressure and ultimately organ perfusion, to make recommendations below 2760 mg/d (which activates the RAAS reaction) assumes that basic biology is being ignored, and that lowered intakes are not harmful (and clearly there is plenty of research showing this). McCarron et al. (2009) saw in this 26-year study that since sodium can’t be stored, it is tightly regulated by the body, regardless of how much is in the diet, and “that public health initiatives designed to lower intakes of this nutrient by altering the food supply are destined to fail.”

What IS true is that little to no distinction is being made between the salt in processed foods and what is found naturally in fresh foods or what you might add at the table.  The main sources of sodium in the U.S. diet are grain mixtures (mainly pasta, breads and rolls), and processed meats like frankfurters, sausages and lunch meats.  This would be why the famous DASH diet (Dietary Approaches to Stop Hypertension) with it’s emphasis on generous amounts of fresh fruit, vegetables and dairy is effective for lowering blood pressure — it is simply removing most sources of processed foods. It’s also considered by many to be a preferable alternative to across-the-board sodium restriction.

Which is also exactly what is seen in research — studies that looked at fresh food, cooked at home, (with salt added for flavor) saw no impact on blood pressure but people who ate out frequently, and ate processed foods regularly had a much higher incidence of hypertension.  If hypertension is a concern, it would be good to also boost potassium, as inadequate potassium will still cause hypertension, even if eating a low-sodium diet. Potassium is so available in foods that you can’t really get it as a supplement — and, you guessed it, it’s highest in fresh foods like leafy greens, bananas, avocados, melons, mango and prunes. Additionally, weight loss and reduction of alcohol intake are known to be extremely effective at reducing blood pressure.

The current U.S. recommendations are 2,300 mg/day. The American Heart Association would prefer that everyone consume as little as 1,500 mg/day, clinging to antiquated research long since disproven. In fact, in light of the overwhelming evidence, the Department of Health and Human Services will be revising the sodium guidelines in 2015. In the meantime, bring back your common sense about food, and avoid “quick fixes” with store-bought food and eat as much fresh food and food that YOU prepared as often as you can. And hand this article to your mother-in-law the next time she makes a comment as you are salting your eggs!

Marlene Merritt, DOM, LAc, is a licensed acupuncturist and runs a wellness center in Austin, Texas. She specializes in Oriental medicine and nutritional protocols.
Request An Appointment
Watch Our Video
Read Our Blog