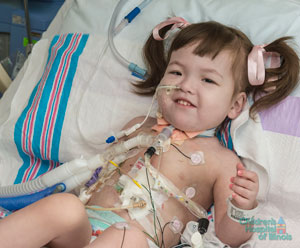 A two-year-old girl who was born without a windpipe had one grown from her own stem cells – making her the youngest person in the world to successfully benefit from this groundbreaking procedure.
Hannah Warren was born in August 2010 in Seoul, South Korea without a windpipe.  She could not breathe, eat, drink, or swallow on her own.  Until she was brought to the U.S. for the operation, she spent her entire life in a hospital in Seoul.  Prior to her trip to the U.S., doctors in South Korea informed her parents there was not much hope for Hannah.
Dr. Mark Holterman, a pediatric surgeon from Chicago, traveled to Seoul on a business trip and decided to meet Hannah after hearing about her from a Korean-born nurse.
After examining her case and speaking with her parents, Dr. Holterman decided the standard surgical operations available to fix tracheal agenesis (the absence of a trachea) were not a good match for Hannah.
Through Internet research, they learned of Dr. Paolo Macchiarini and his experience in making new tracheas out of stem cells and scaffolds and then placing them into adult patients.
Dr. Macchiarini agreed to work with Dr. Holterman, and after two years of travel arrangements, paperwork, and planning, Hannah and her family came to the U.S.  Her procedure was performed at the Children’s Hospital of Illinois in Peoria.

Hannah Warren, aged 2, received a pioneering artificial trachea having been born without a windpipe.

The nine hour procedure took place on April 9 and is only the sixth of its kind and the first to be carried out in the U.S.  It was approved by the Food and Drug Administration under rules that permit experimental operations when the patient has little to no chance of survival.
The stem cells used came from Hannah’s bone marrow and were taken out with a special needle that entered in through her hip bone.  They were then seeded in a lab onto a plastic scaffold, where it took a week for them to multiply and make a new windpipe.
Doctors are not entirely sure what happens after implantation, however, they believe the stems cells direct the body to send other cells to the windpipe, which then spread out and send the correct tissues to grow on the inside and the outside of the tube.  There is no need for medications to suppress the immune system to prevent rejection of the implant, because the windpipe was made of Hannah’s own cells.
A similar procedure was performed in 2011 by Dr. Macchiarini on a man in Sweden who suffered from late-stage tracheal cancer and received a new windpipe made in the lab from his own stem cells.  Unfortunately, this man passed away four months following the procedure from uncertain causes.
Hannah’s doctors said in a news conference on Tuesday that there are early signs that the windpipe is working and they have every reason to believe Hannah will recover and live a normal life.

A Long Road to Recovery The procedure took surgeons nine hours and was the first of its kind to be carried out in the U.S.

Only about one in 50,000 kids around the world are born without a windpipe.  The stem cell technique has been previously used to make other body parts and could be a stepping stone in treatment for other birth defects and childhood diseases.
The toddler will start a long rehabilitation process as she begins to breath normally for the first time.  Doctors said although she experienced a small infection after the operation, it has been treated and she is now in good spirits.
The medical team hope that with additional procedures she will be able to eat through her mouth as well as speak.  Dr. Macchiarini also pointed out that as she grows, Hannah will need a larger windpipe.  The surgical team attempted to delay the need for a replacement by making the implant a bit oversized as well as including some biodegradable plastic – permitting the implant to stretch.
Hannah’s parents are pleased with the procedure thus far and are happy that Hannah continues to defy the odds.  The team of doctors will continue to follow Hannah’s progress.
Dr. Macchiarini willl also begin to look into doing a clinical trial using his procedures with the approval of the hospital in Peoria and the FDA.