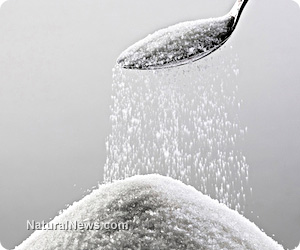 (NaturalNews) If you don’t know by now, stevia is a plant that grows in Brazil  that tastes naturally sweet; therefore, it is dried out and ground up and is a  great substitute for sugar, eliminating unwanted calories. It does have a little  aftertaste, as if it was artificial, but it is not. Stevia is becoming easier to  find in the mass market, and most vitamin shops and health food stores carry it  in a box or in little packets that you can take with you to work, school or  wherever it’s convenient.
Truvia and PureVia are mixed with chemicals in  a laboratory. It may come from something natural, but it’s not natural anymore.  Splenda tried to fool the natural sugar substitute “world” when they claimed in  their tagline that it came from natural sugar cane, but the other big artificial  sweetener companies complained so much, even in court, that Splenda had to trash  the slogan. After all, Splenda is a chemical concoction, just like Truvia and  PureVia.
Truvia is cooked, altered or, in other words, GMO. Don’t eat it.  Don’t drink it. Lump it in with sorbitol, sucralose and aspartame as something  UNNATURAL that you don’t want swimming around in your blood stream, or sticking  inside cleansing organs for long periods of time. Some research shows that  artificial sweeteners may never get expelled by the human body, because they  taste sweet, so the body tries to ingest the lab concoction and use it  for energy, which is like a Trojan horse slipping past the blood-brain barrier  and doing chronic damage. Insert Obamacare, huge medical bills, chemo and  radiation and you’ve got the main reason why Big Pharma is Big Pharma. (http://www.naturalnews.com)
It is true that stevia is  a plant that is native to South America, but what you may want to know is that  80% of all stevia comes from China now, and if you trust China to  safely produce any food “product,” you have a lot to reconsider. China has  proven time and time again, as the Health Ranger has documented thoroughly, that  they cannot be trusted for quality. So you may want to think twice about stevia  too. (http://www.naturalnews.com)

Truvia contains erythritol, which, according to  Truvia, is a natural sweetener, produced by a natural process. They go so far as  to tell you that it is found in fruits likes grapes and pears, and that’s true,  but then comes the “rub.” The amount of erythritol found in say, watermelon or  grapes is somewhere between 0.0022 and 0.0047 percent by weight. In order to  harvest ONE OUNCE of erythritol, you would need about 15 to 25 POUNDS of  fruit. This means that Truvia’s erythritol is manufactured. In fact, it’s made  from a food-grade starch – genetically modified corn – and is broken down by  fermentation. So is it still “natural” if it’s coming from fermented Monsanto  GMO corn?
Truvia and PureViaare the latest  sweeteners to hit the market from Coca-Cola (joint venture with Cargill) and  PepsiCo. They are both marketed as natural “stevia” sweeteners. Let’s be very  clear here: Truvia and PureVia are NOT just stevia.

Want to mutate your cells  and help cancer develop in the temple of your soul? Will you become a statistic  and get prescribed chemical statin drugs for a chemically driven disorder of  your cells? Will you feed the cancer superweeds more Roundup, by eating GMO  food, GMO sweeteners, synthetic additives and preservatives? Know the difference  between organic and artificial. Check out “Fooducate,” the free smart phone app  that scans barcodes to tell you if something is artificial, GMO or simply “in  question.”
Sources for this article include:
http://www.bryanmarcel.com
http://www.anh-usa.org
http://naturalhealthnews.blogspot.com
http://www.naturalnews.com
http://www.militaryspot.com
http://www.fooducate.com
Learn more:  http://www.naturalnews.com/043163_stevia_PureVia_Truevia.html#ixzz2mzx33bI8