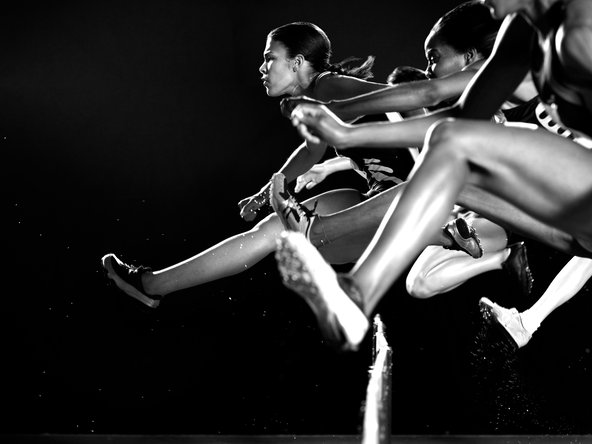 Back in the 1960s, researchers in Africa clocked the wild cheetah as it ran and determined that at full gallop, a cheetah reached a top speed of about 65 miles per hour, making it easily the world’s fastest land mammal. No other quadruped or biped comes close. Galloping quarter horses top out around 47 miles per hour, while sluggish humans, in the person of the world record 100-meter sprinter Usain Bolt, have attained a top speed of less than 28 miles per hour. Even the bullet-trainlike greyhound, similar in build and running style to the cheetah, doesn’t surpass 40 miles per hour.

So what is it about the cheetah and its particular physiology or running form that allows it to set such a blazing pace? And can a better understanding of cheetah biomechanics help humans to move faster?

Those were the questions that motivated a group of scientists at the Structure and Motion Laboratory at the University of London, who decided to compare the cheetah with one of its near rivals in speed, the greyhound.

“The two animals are quite alike in terms of body mass and running form,” says Alan H. Wilson, a professor at the Royal Veterinary College at the University of London, who led the study, which was published in The Journal of Experimental Biology.

Both animals employ a running form known as the rotary gallop. Their legs churn in a circular motion, the animal’s back bowing and its hind legs reaching almost past its ears at full stride. (Tongues tend to loll, too, but there’s no indication that this attribute affects speed.)

“Up to a speed of about 40 miles per hour, there’s very little difference,” Dr. Wilson says. “But what happens after that,” when the cheetah finds another gear and accelerates to 65 miles per hour, “is something we’d like to understand. We believe it can help us to better understand the determinants and limits of speed itself.”

But closely studying cheetahs in the wild is logistically challenging, especially if you want exact measurements of running force and stride. So the researchers turned to captive cheetah populations at a zoo in Dunstable, England, and a sanctuary in Pretoria, South Africa. The animals were extensively measured and filmed.

Then some of the English cheetahs were taken to the performance lab and encouraged to chase a chicken-meat lure along a 90-meter track dotted with force plates to chart their strides. Meanwhile, high-speed cameras recorded their every movement from multiple angles.

The researchers repeated the experiment with trained racing greyhounds, then compared the two animals’ pace and form.

The first thing they noted was that captive cheetahs are relatively slow, compared with their wild brethren. The galloping zoo-bred cheetahs topped out at a little less than 40 miles per hour, slightly lower than the top speed for the greyhounds.

“That finding was not really unexpected,” Dr. Wilson says. Cheetahs that live in zoos do not have to feed themselves. They have less motivation to run hard, even when a chicken lure is waggled enticingly in front of them.

“They also don’t necessarily learn to gallop as fast,” Dr. Wilson says. “There is almost certainly some amount of speed that depends on learning” to be swift enough to bring down prey.

Dr. Wilson is now collecting data on wild cheetahs, but even in the zoo-bred animals, there were hints of their capabilities. When the cheetahs “felt like it,” Dr. Wilson says, their leg turnover rate spurted and their pace dramatically increased. They began bringing their legs around faster and faster, their strides lengthening, even as the frequency of their strides increased.

The greyhounds, on the other hand, maintained a fairly even stride frequency throughout their entire run.

The cheetahs also hit the force plates differently from the greyhounds, their paws remaining on the ground slightly longer — an action that presumably allows the legs to absorb more of the forces generated by the pounding stride.

“One of the limits to speed is that, at some point, you can generate more force than the muscles can withstand,” Dr. Wilson says. Striking the ground with such shattering oomph can cause muscles to shred. The cheetahs reduced this risk by letting their paws linger a fraction of a second longer on the ground than the greyhounds did.

The lessons for human runners are somewhat abstract, since we have only two legs and, with rare exceptions, cannot curl them up past our ears, as cheetahs and greyhounds do. “The cheetah’s back functions as an extension of its hind legs,” Dr. Wilson points out, its spine coiling and extending with each stride, as ours cannot.

But there are tips we can glean from the cheetah. The speed with which a creature brings its leg back around into position appears to be one of the main determinants of speed, Dr. Wilson says. The faster you reposition the leg, the faster you’ll move.

But swift leg turnover requires power. “Compared to the greyhound, the cheetah has bulky upper legs,” Dr. Wilson says. Its powerful thigh muscles allow its legs to pump more rapidly than the spindly greyhound’s can.

So strengthen your thighs.

And perhaps invest in lightweight racing shoes. “Having less weight in the lower portion of the leg aids in swift repositioning” of the limb, Dr. Wilson says.

Finally, while a dangling lure is optional, being hungry, Dr. Wilson says, at least metaphorically, “probably helps quite a bit.”