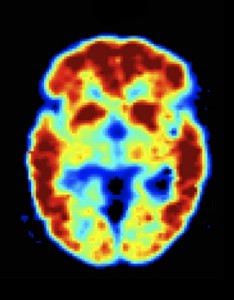 What’s bad for your heart is often bad for your brain. High cholesterol, high blood pressure, diabetes, and unhealthy “hardening” of the arteries increase your risk of mental decline or dementia later in life. A study published online today in Neurology opens a window into how cardiovascular disease affects the brain and may even lead to some important insights into Alzheimer’s disease.

Researchers from the University of Pittsburgh and the University of Virginia found that elderly people with the stiffest arteries were most likely to show the kinds of damage to brain tissue often seen in people with dementia. Although heart-unhealthy lifestyles have been linked to increased risk of Alzheimer’s disease—the most common form of dementia in older adults—the results of this study suggest there may be a silver lining: “This is more evidence that cardiovascular health leads to a healthy brain,” says University of Pittsburgh researcher Timothy Hughes, PhD, the lead author of the study.

In the past, getting a close look at both brain and artery health could only be done in people who had died, since an autopsy is necessary to get samples of brain tissue. The Neurology study provides a view into living brains—and a chance to study the changes that build up to full-blown dementia.

“There have not been many studies that look at amyloid pathology in living people in combination with evidence of vascular disease on imaging to predict development of dementia,” says Dr. Gad Marshall, an assistant professor of neurology at Harvard Medical School and Alzheimer’s researcher at Brigham and Women’s Hospital.

Hughes and his fellow researchers conducted a study of 91 elderly men and women, average age 87, still living independently in their communities. Each underwent a special kind of PET brain scan to look for beta amyloid, the sticky protein that collects in the brains of most people diagnosed with Alzheimer’s disease. Deposits of amyloid, called plaque, lead to the devastating changes in mind and memory that are the hallmark of Alzheimer’s disease.

Although none of the participants showed signs of dementia, about half of them had significant amounts of amyloid deposits in their brains. “We did not expect to see so much plaque in so many participants in the study without dementia,” Hughes says.

The study participants also underwent a series of tests for cardiovascular health. One measured arterial stiffness, an indicator of the health of the body’s network of arteries. Most people know arterial stiffness as “hardening of the arteries,” brought on in large part by the effects of high blood pressure and other damage to artery walls. In general, arteries stiffen with advancing age. People with the stiffest arteries were much more likely to show two kinds of changes in the brain:

Two “hits” to the brain

Besides confirming the ravages of cardiovascular disease on the brain, the study provides some clues that could help solve a longstanding puzzle about the relationship between amyloid protein and Alzheimer’s disease. Many people with significant amounts of amyloid in their brains do not show symptoms of dementia. Yet aging can sometimes nudge them over into dementia. What happens in the brain to make that happen?

One possible answer is known as the “two hit” theory of amyloid and vascular disease. Some research suggests that “amyloid collects in the brain over years and decades until the brain can no longer compensate for it and cognitive impairment begins to set in,” Hughes says. The combination of amyloid deposition and damage to small arteries that nourish brain tissue could, hypothetically, tip the scales. “Amyloid deposition and vascular disease may be the double hit that may really cause a person to convert to dementia.”

That’s speculation right now, but being able to track both amyloid protein deposits and physical damage to the brain over time in living people could get us to an answer—and a powerful way to head off dementia. “Vascular health leads to brain health,” Hughes says. “That’s the big overarching theme here. If the same is true in younger adults, it might give us a way to prevent amyloid deposition in later life.”

In other words, a healthy diet, daily exercise, not smoking, and other healthy lifestyle choices from early adulthood on could keep the brain and heart in good shape for decades.