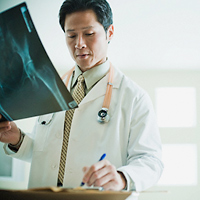 RA symptoms are similar to many other conditions including osteoarthritis. So how do you know what’s causing your joint pains?

By Dr. Sanjay Gupta
For people with rheumatoid arthritis (RA), early diagnosis and treatment is critical to relieve pain and avoid serious complications such as joint deformity or osteoporosis. But diagnosing it can be tricky.  There’s no one test for RA, and its symptoms are similar to many other conditions.

RA is a chronic autoimmune disorder in which damage to the joint tissues causes painful swelling. The Mayo Clinic lists joint pain and stiffness, along with fatigue, fever, and weight loss as common symptoms.

The problem, as Dimitrios Pappas, MD, a rheumatologist at New York Presbyterian Hospital/Columbia University Medical Center points out, is that “many, many diseases present with joint symptoms.” Here are some examples:

“When people have [joint] symptoms, often the first person they see is their primary care doctor,” said Jonathan Samuels, MD, a rheumatologist at NYU Langone’s Center for Musculoskeletal Care. But doctors are “becoming more aware of RA symptoms…and referring patients to specialists.”

“We’re definitely getting more consultations from primary care doctors and internists who are trying to pick up the disease earlier,” agrees Richard Hariman, MD, a rheumatologist at the Froedtert Hospital/Medical College of Wisconsin in Milwaukee. “There’s a lot more public awareness of RA.”

The patient’s pattern of joint pain can help a doctor distinguish RA from other conditions. People with RA typically have severe joint stiffness in the morning that tends to ease as they move around. Pain associated with osteoarthritis, on the other hand, usually worsens as the day goes on.

“The joints affected are also different,” said Dr. Samuels. “In RA, it’s typically the smaller joints of the hands and the feet; and osteoarthritis will affect bigger joints, like the knees and hips.”

Lab tests to identify RA include a blood test to measure levels of rheumatoid factors (RF), proteins produced by the immune system that attack healthy joint tissue. The test is not fullproof, however, since elevated RF levels can be found in healthy people, and people with RA may have normal RF levels.

“X-rays can show damage and erosions in the joints, while ultrasounds will show the inflammation,” said Pappas. Though imaging is also used to spot signs of osteoarthritis, damage related to RA looks different. “In RA you’ll see erosions, which kind of look like little bites taken out of the joints; [but] in osteoarthritis, you’ll see a narrowing of a space between the joints,” according to Dr. Hariman.

“After the extensive history and x-rays and lab tests that diagnose the disease, we use all that information to figure out what stage the disease is in and how to treat it effectively,” said Philip Kempf, MD, a rheumatologist at Virginia Hospital Center in Arlington, Va.

Though RA cannot be cured, there are medications available to treat the inflammation and pain while preventing joint damage. “We’re able to stop the progression of the disease,” said Pappas. As opposed to osteoarthritis where “we are trying to decrease the pain and discomfort but can do little to prevent damage from occurring.”

“The quality of life for people with rheumatoid arthritis has gone up dramatically,” Pappas said. “Though it may at first be difficult to differentiate from other diseases, the variety of testing we have available makes it easier.”